I have been reflecting on the word loyalty since yesterday. Yesterday, Cleveland, OH welcomed 1.3 million people downtown to witness the 2016 NBA Championship Cavaliers team in a confetti strewn parade beginning at the Q Stadium, traveling down E. 9th street and ending at a rally at the mall.

To photograph even a part of this event is to document history. And I, along with every person with a smart phone, attempted to do just that. You need to bury that claustrophobic fear of large crowds and just give in to the chaos in order to have any fun in this kind of situation.

For my group, it all came together, in a way that things rarely do, but you recognize and cherish a day like this when it works out in your favor. 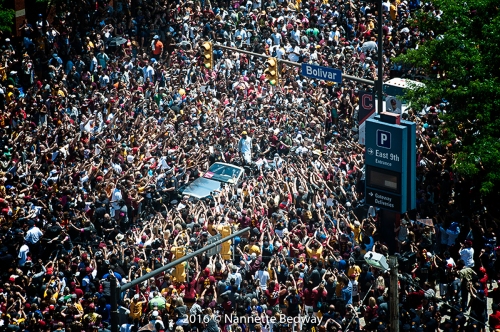 First, you make the decision that yes you want to do this. If for no other reason than to show respect for a young man, Lebron James, who has shown such a great loyalty to his hometown. Second, you put on your professional hat and start to work some logistics. My studio and therefore my parking space is on the parade route. Also, A.J. Rocco’s is on the first floor so our need for coffee or something stronger would also be taken care of with ease. We decide to leave at 7AM, based upon one person’s prior experience with Brown’s tailgate partying. With Starbucks coffee in hand, the traffic is already at a crawl on 77 N, so we decide to take the back roads as far as possible. This traffic is moving along so we are feeling some good karma for handling our first little problem. A phone call to a good friend to see how far we can stay on this road determines, in the nick of time, when we better hop back onto 77N. Next call is to my friend and the operations manager at my studio building to see if Ninth Street is still open. “Yes, but not for long from the looks of it,” is the answer, we are moving but only at about 10mph. We are just feet away from our exit on Ninth when he calls back that they just closed access on 9th and we see the officer blocking the exit and rerouting us to 22nd. This won’t be so bad as I’m thinking that we can cut over to Carnegie and go right on 9th but no, now 9th is completely shut down so we just lost our parking place and the coffee is working so we are all in need of a restroom.

OK, next plan and friend is needed. I decide that we are going to cut to 30th since 22nd is so backed up and go to the camera store where I have been doing business for over 20 years (once again Loyalty) Dodd’s Camera on 30th and Carnegie.[ http://doddcamera.com/] We walk in, use the facilities, and when we come out there is Charlie, who has been working at the store since I opened my studio. I explain my dilemma on street closures and lost parking spaces and without hesitation he grabs a set of keys and says “follow me”.

He opens the gate to the overflow parking lot and lets me pull in my jeep. No questions asked. The day would have been over without beginning if he didn’t do this for us. It was more than kind.

We now join the masses of people of all sizes, shapes and colors heading down Carnegie to the parade route. The two unifying characteristics are that almost everyone is wearing either a Cav’s tee shirt or hat and everyone is wearing a smile. (Again, Loyalty to this team.)

We walk into the Caxton building where my studio is located and the first person we see is Ray … who says “you made it, want to go on the roof?”

Without question that is right where I want to shoot from and only as we are walking up the narrow steps to come out onto the roof do I remember to ask my friends if they have any fear of heights. Thankfully, they do not and the brick walls are quite high so we feel pretty secure on this spectacularly beautiful day. Ray knows me well enough to know that this would be a prime location and he just made it happen. (Again, friendship and Loyalty.)

The parade started late and about 4 hours later we were sunburned and hungry, but had all gotten great shots and had a very successful day. Ray showed up on the roof with a pizza that he somehow got from a very busy A.J. Rocco’s kitchen. [http://www.ajroccos.com/] So we had a day celebrating loyalty to a town and documented because of the loyalty of a few good friends. A very good day!